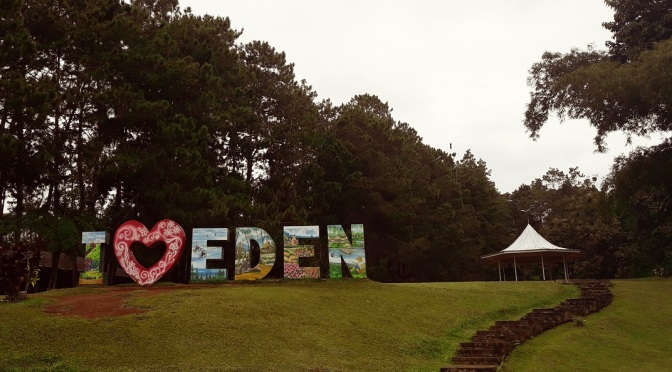 Okay, I know, I suck at keeping promises. Earlier last year I swore I’d write regularly, and I haven’t been able to do that in the past few months. I could just say I’ve been incredibly busy, but the truth is there are just some days when I haven’t felt up to it. I mean, we all have lazy days, right? But you know what? I do appreciate all of you who follow me, so I’m going to thank you by really buckling down and writing more often, starting with my long-delayed account of last year’s final trip: Davao. To make up for lost time, it’s going to be a long series, so I hope your seat’s comfortable.

Mindanao is the major island in the Philippines I’ve managed to visit and explored the least. In fact, the the first and only time I was there was in 2013 when I was flown to Siargao for my job (it was also the first time I tried surfing). That is, until I decided to seize the opportunity during another one of Cebu Pacific’s seat sales. I invited my Aurora companion to buy tickets early in 2016 to go to Davao City in December. This trip would accomplish two things: our desire to explore the city and to visit my half-brother and his family, who have been asking us to come over for the longest time. Originally, only two of us would be going, then about mid-2016, my sister and her husband realized they would be able to join us and booked their flights too.

When our plane landed at 6AM at Francisco Bangoy International Airport, my half-brother was there with his teenage daughter (it was a Sunday, so no school) to welcome us to the city. First thing on the agenda was breakfast (tapa flakes at Tapa King, which I had been missing immensely), then we tried to see if we could get into Jack’s Ridge—a lookout point—to check out Davao City from a bird’s point of view. Turns out, they didn’t open for a couple more hours. Bah.

When that didn’t pan out, we set off for a one-hour scenic drive to Eden Nature Park and Resort in the town of Toril. It’s pretty much as its name says it is: it’s a large open green space with a zoo in one area, a resort in another, and a whole bunch of trees. All entrance fees include either a snack or lunch, which sucks because after seeing the snack, we would have rather paid for just the entrance to the park and eaten somewhere else. Having said that, the place is rather nice. It’s huge; we could have spent hours exploring every corner had it not been raining. Yep, we were in an open park while it was raining, and the fucking cold was threatening to freeze my fingers off. But it’s definitely worth a visit if you enjoy the great outdoors and have a couple of hours to kill.

After that, it was another hour of driving back to the city for lunch and we were at this restaurant in Bangkal called Kookels, which became a joke among all of us throughout the entire trip. In case you needed to know, we’re a bunch of idiot kids in adult bodies who find joy in such things as funny-sounding names. It’s kind of like a bar and grill with a large selection of affordable Filipino dishes, and most of them are sizeable enough for sharing. Tasty, too.

After having filled our bellies and making plenty of “Kookel” jokes, Kuya  (a Filipino term of respect for older brothers, for those who don’t know) took us to Annipie, a must-try Davao pastry shop we’d read about that supposedly sells great cinnamon rolls, among other things. We bought a few items, after which he dropped us off at our first hotel, Pacific Palm Suites (Yes, during our four-day trip, we stayed at three different hotels.) at 2PM to check in and get some rest. Hey, the four of us had been awake since around 9 the night before, getting ready. We needed it. (By the way, my review of the hotel will follow later on.)

Having napped until 7PM, we decided to take a cab and meet Kuya and his family at SM Lanang for dinner. We didn’t eat there, though, since my brother-in-law was planning on going somewhere to meet with a friend who used to live in Manila but is now based in the city. We met up with them at this banchetto-type place, had some snacks, chatted, and said good-bye. Our actual family dinner happened at this sisig restaurant close to our hotel called Abuelo’s,  which claims to offer authentic Kapampangan sisig. It’s an open bar-type restaurant, and wouldn’t you know it, the sisig‘s actually good.

We parted ways after dinner, Kuya and his family heading off by car to their place, me and my travel companions walking to ours. At the hotel, we had a quick coffee (and those damn good cinnamon rolls and butterscotch bars) before turning in for the night. as much as we wanted to stay up as late as we normally would at home, our eyelids wouldn’t permit us. Besides, another adventure awaits tomorrow.