It’s been four months since I took my trip to La Union with a friend, and I haven’t felt up to writing about it until now, so I hope you won’t mind a little bit of prattling. I’ll try to keep the chatter to a minimum, especially since the photos are a lot more interesting.

I’ve actually been to La Union years ago (with my sister and her friends), but we did nothing but eat and get beat up by the waves as we foolishly tried to swim at the beach. This isn’t my first time surfing too; I went to Siargao a few years ago where I got my first taste of it. I wiped out more times than I got to stand, but, as any surfer will tell you, it’s pretty addicting. So when the opportunity came to pay the province a visit again, I took it. This time, I went with fellow Motley Crew-er Dani (for reference, consult our group’s Alkan and Palawan trips), who has also been raring to go back to La Union for some surfing.

After a comfortable four-hour journey aboard a bus we booked online, we reached La Union, where I learned a couple of things I thought I’d share with you in case you’re thinking about going there in the future.

1. People at La Union are some of the friendliest we’ve met. Asking for directions was easy; from the traffic enforcer to the jeepney barker, everyone we bothered had a smile on their faces while giving us instructions. At one point, we flagged down the wrong jeep trying to get to the beach, and the driver actually pulled over for a few minutes and flagged down the right jeep for us. Then on that jeep, the driver gave us back our excess fare when he realized that our destination was closer than we originally thought.

Maybe we just looked like a couple of desperate tourists who can’t find their way out of a bag, but maybe they really were just being nice. I’m going with the latter so I can feel better about myself.

2. If you want clean and comfortable accommodations for a relatively affordable price, you’re going to have to venture out of San Juan. We realized too late that the hotel we booked was two towns away from San Juan, which is the surfing capital of La Union. On the other hand, Villa Estrella Resort Hotel in Bauang is worth the travel. More on that in a separate post, but my point is, if you don’t mind the extra travel, consider exploring your options a bit far from your destination.

3. The best time to surf is around 4PM. If you want to make the most of your hour-long surfboard+instructor rental at the long stretch of San Juan’s surfers’ beach in Urbiztondo, you want to take on the waves at about this hour. The waves are pretty relentless (hardly any wait in between swells), so much so that the water actually looked crowded with pros and novices of all ages, shapes, and colors. I myself only got up the nerve to ride the waves (wow, look at me, using terms like that) at about 9-10AM the next day, and there was quite a lull in between surf-able (is that a term?) waves.

4. There is no shortage of surfboards to rent. Or surf instructors to hire. As a provincial city famous for its waves, it only makes sense that the beach is covered with locals eager to teach tourists how to stand on a board and hope not to wipe out even for just a few seconds. We settled for Sebay Surf Central, which also has a hotel on the beach. The guys are incredibly friendly and very thorough. They don’t just tell you to try to balance and send you on your merry (or scary) way; they teach you everything, from the parts of the board, to the different ways of hoisting yourself up as the waves propel you. If you want them for room rental, surfing lessons, or even info on whether the waves are worth a shot that day, you can get a hold of them at 09176401118 or (72) 8884075.

5. Swimming presents a challenge. As expected, strong waves are more ideal for surfing than swimming. That’s not to say you’re not allowed to cool off. If you do, however, be careful not just of the incoming waves, but also the surfers barreling down towards the shore with their tough, tough boards. Try to seek out a part of the beach where there are few people so you can wade with little fear of painful collisions. And don’t swim alone; you don’t want to get dragged away by those strong waves.

Anyway, thanks for sticking around, but enough chit-chat. The photos say a lot more anyway. 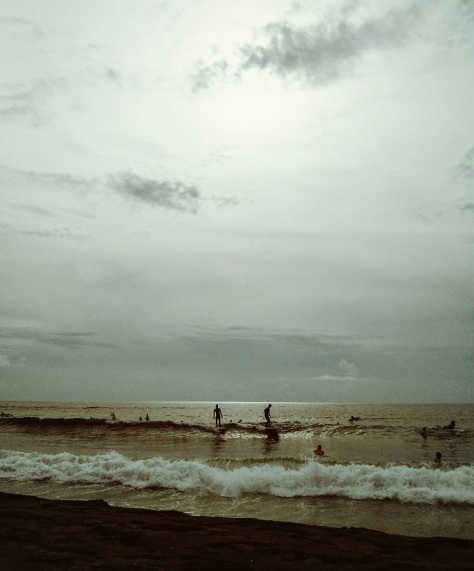